On Saturday October 10th, Gallery Quest submerged itself, together with eight other art fanatics in the gallery scene around Potsdamerstraße. The gallerytour started at Esther Schipper gallery (soon to be joined with Johnen Galerie), where we explored the work of Mexican artist Gabriel Kuri (1970). He selects materials and found objects, that seem to have no value and makes new compositions with them.

The installations and sculptures talk about traces, about objects that people leave behind. Like straws that you can buy with 50 in a box. There is no original object here, and they are treated as such. An individual straw has no value, is interchangeable, and easily discarded. Kuri picks them up and puts them in the niches of his sculptures. Like people do when there is no trashcan around. A somewhat curious act, of shamefully trying to give it a place anyway. 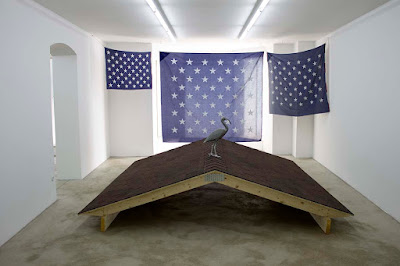 Next on the route are Galerie Micky Schubert and Société on the Genthinerstraße. Micky Schubert shows work by LA-based American artist Barry Johnston (1980). His work is difficult to grasp because of it's many references. With an opening performance he activated the work, and now we are left with the "stage". Poetic texts can be found in stacks on the ground, they hang on the wall and are laying on the gallerist's table. They are the core of the work and your entrance key. The hypnotic song texts are urging you to  keep going, keep on dancing. They are hinting to the free state you are in while partying, totally loose of everything, no consequences until tomorrow.


At Société there are paintings on view by NY-based Canadian artist David Rhodes (1983) that hurt the eyes. He uses a high chroma yellow paint that bounces almost as much light back as a white surface does. The image is thus not only contained on the canvas but also floats in the room.

Next is Galerie Tanja Wagner in the Pohlstraße. The exhibition by Bosnian artist Šelja Kamerić  (1976) is made out of three parts and shows beautiful poetic works that are related to her background, growing up in a war-torn country. The photo collages talk about the little knickknacks you have in your drawer, the little stuff you keep on taking with you every time you move instead of throwing them away. They are presented in a clean way, on a flat surface, with numbers next to them. The accompanying text is a poetic exploration of their heritage, use or purpose.

The second part consists of perfect stone spheres, which can be found "in the wild" in Bosnia and in other places all over the world. There origin is unknown. In Bosnia they are believed to guard the spiritual balance in the world and therefore should not be moved. The spheres in the gallery are engraved with coordinates of places in Bosnia where war atrocities where committed and a spiritual balance was nowhere to be found at that time.

The three boxes in the window are the third part and refer tho the help packages Kamerić and her family received during the Balkan war. Their contents varied from old newspapers to used candles to cans of food that where over date. Despite their uselessness, the artist still remembers them in a positive manner, because they still sort of felt like presents with a moment of excitement about what was to be found inside. You can ask yourself what one would really need in times of despair.

In galerie Arndt we got more familiar with contemporary art form Southeast Asia. Korean artist Jeewi Lee (1987) showed traces from her home in the form of traditional rice paper floors. She let parts of floors send over, dirty, with spots and tried to clean them with good aggressive German cleaning products. Now, new traces from the cleaning got left behind, and of course not all old traces could be removed. Some stains, like in life, are here to stay.

Indonesian artist Arin Dwihartanto Sunaryo (1978) has an interesting way of working, throwing paint onto a layer of hot raisin that he has mixed with ashes from the vulcano Mount Merapi. The result is a surprise: the part that lies under is what we look at on the wall. It leads to very vibrant images with a lot of depth.

Across the street in the courtyard of Potsdamerstraße 77-87 where Tagespiegel used to be, is, among others, Galeria Plan B located. On view is work by Roemanian artist Şerban Savu (1978) which deals with the border between art, art history and reality. Savu is a skilled painter who paints everyday scenes with referrals to art history. Like the painting "Ceci n'est pas un tableau" which shows a painting of a construction scene, hanging on his studio wall. Watching a painted painting in Savu's style, which he never made, hanging on the painted wall of his studio, hanging in a gallery space, hints for example to all the images we see in everyday life which are not recognized as art but could be if we paid more attention.

Last stop is the renowned Blain/Southern gallery where old and recent photo's by German film giant Wim Wenders (1945). It is interesting but also dangerous when an artist starts working in a new medium. Are these pictures hanging here because they are really new and improving or are they hanging here because they are made by Wim Wenders? In an interview with Deutsche Welle he talks about the joy of taking photo's. Making films is a group project, he states. Photo's he can do all alone, no explanations needed. His images are big, about time moving on, places that remain, but not always stay the same. Hopper's emptiness can be found in some of his American photo's, of which the photo's of abandoned drive in movies that hang upstairs are the best.
Gepost door Laureline op 10:15 Geen opmerkingen:

Alicja Kwade (Poland 1979) seems to be everywhere this year. In Berlin we could see her work GoldVolks at abc- art berlin contemporary. At the same time, an overview of her work called Monolog on the 11th floor opened in Haus am Waldsee.

The exhibition is a accumulation of her ten year art practice, since she graduated form the Universität der Kunste in 2005. And as she explained herself during the artist talk, it is a chance to see "how the new came into the world". This "new" refers to the objects, which are the result of the transformation of an idea into a physical form. The thought that became a work of art.

One of her inspirational sources, and very visible in this exhibition, are scientific processes. When she comes across something that triggers here, she does what a lot of us would do; google it till you can't google no more.


An example is the discovery made by Jacob Bernoulli in the late seventeenth century, that the spiral can be found everywhere in nature. This theory literally found it's shape in the work Eadem Mutata Resurgo 3 ( transformed I rise again as the same), (2013). It is a curled door, that may also refers to life, that also spirals in the same circles over and over again. Kwade states the spiral as one of the most intriguing forms, because it has no beginning and no end. It could go on forever. 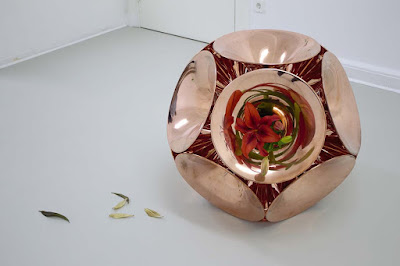 Less obvious are the strange trumpets, who got nothing to do with music and everything with the theory of wormholes (for my non Star Trek friends; this is the theoretical possibility of the folding of space, creating a tunnel between two distant regions). These copper shapes are connected to tubes that go through walls and through the ceiling, making of the entire Haus am Waldsee an Alicja Kwade universe.